skip to main | skip to sidebar

Happy Texas Is A Sad Place To Be

**NOTE** My IPS was giving me trouble yesterday so I wasn't able to post this on time. Please excuse the delay.

In the movies there are a several well-worn script formulas. One of the most common is the caught-in-a-situation-forced-to-be-something-you’re-not template. Over the years there have been some wonderful examples:

Some Like it Hot - Jack Lemon and Walter Matthau try pass themselves off as female musicians to hilarious effect.

The Music Man - The movie version featured Robert Preston as a slick traveling salesman attempting to convince an entire town that their biggest social ill is six-pocket pool and the remedy is a community marching band. Preposterous, I know, but it worked.

Dirty Rotten Scoundrels – Steve Martin and Michael Caine play con men each trying to out con the other only be take by their mark.

School of Rock – Jack Black masqarades as a teacher attempting to convince a group of incorrigible little grade school students (and himself) that they have what it takes to be rock stars.

Unfortunately Happy Texas is not one of them. 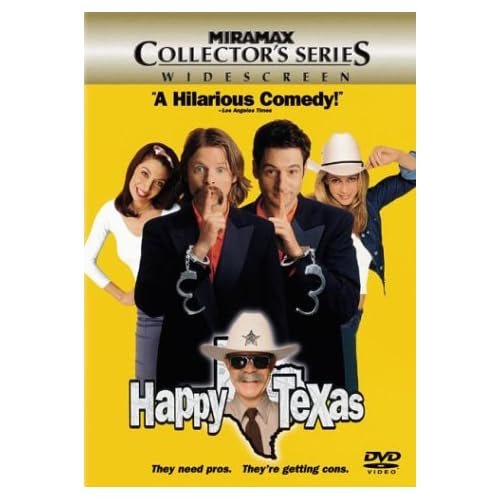 The plot summary on IMDB describes the movie this way:

Two escaped convicts (Jeremy Northam, Steve Zahn) arrive in the town of Happy, Texas, where they are mistaken for a gay couple who is to host the town's Little Miss Fresh Squeezed beauty pageant. Enjoying the celebrity and using their skill as con-men, the two adopt their persona to take on the task.

OK. But what the summary does NOT tell you is that there is no way on God’s green earth that anyone, not even the small town rubes of Happy, Texas, would believe that Steve Zahn could pass as a gay man. Even if he does go by David rather than Dave. Not since the '70s would a gay man be caught dead with facial hair like that unless he was auditioning for a Village People revivial or Freddy Mercury impersenator. I'm all for suspended disbelief, but this going a bit too far.

Sadly, this movie makes absolutely no effort to depict its actors as anything other than caricatures. Whether its Jo the small town bank manager, who turns out to be a woman, or the frumpy school teacher who is really a sex-crazed vixen, or the bumbling cast of local yokels, it's clear that character development was not in thr formula. Not even William H. Macy (as the “secretive” town sheriff) can save this shallow, sophomoric piece of crap. While the script gives them very little to work with, most of these actors display the range of a Daisy air rifle. And is Jeremy Northam trying to channel Alec Baldwin or does he always sound like that?

Although the writers probably think they’re clever, there is very little in this movie that actually passes for comedy. Naming your main character Wayne Wayne Wayne Jr. is the sort of creative writing I would expect from a third grade comic book, not a feature film. And in this post Jon Benet world, calling the pageant "Little Miss Fresh-Squeezed" is down right creepy.

Half way through the movie Steve Zahn takes his frustration out on his partner this way,

"If you ever leave me with a kid again I'll make sure you never have one. You have no idea what those screaming booger eaters are like. They expect you to... know stuff!"

Nice! Sounds like it's all too typical, nothing creative.

I've not seen this movie, but I don't like your disparaging remarks about the Daisy rifle. I once hit a kid from 50 feet with enough force to have his mom call the police.

Great review -- really enjoyed reading it. Sounds to me like another case of a movie having good people who cannot possibly do anything to save poor writing or poor direction or poor editing or poor something else. Sorry to hear about your ISP problems -- but this was worth waiting for. :)

Did you see he has another D list movie out? As if Nacho Libre isn't/wasn't bad enough... School of Rock was B movie material...IMHO

Please tell me that your band sings a tenascious D song??? LOL ;o)

There and Back Again: FrankenKristin's Tale

Where In The World Are You?